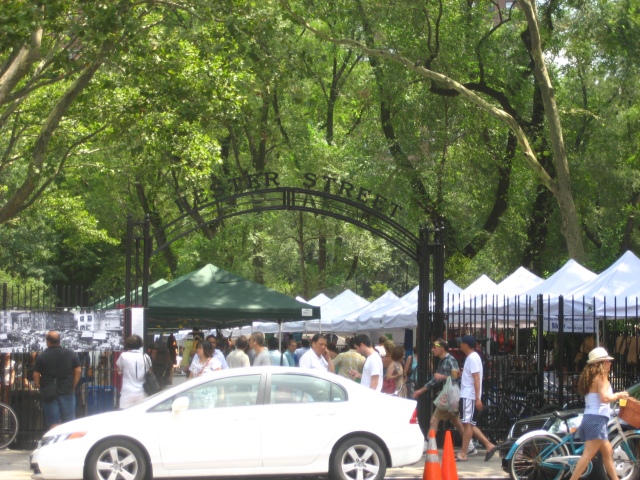 I can safely say that the Hester Street Fair on the Lower East Side in New York City is one of the best food and artisan markets I have been to in a while. It is modest in size, so while it packs in several vendors and a ton of variety, it is not overwhelming. One can easily peruse every stall in under a half hour. 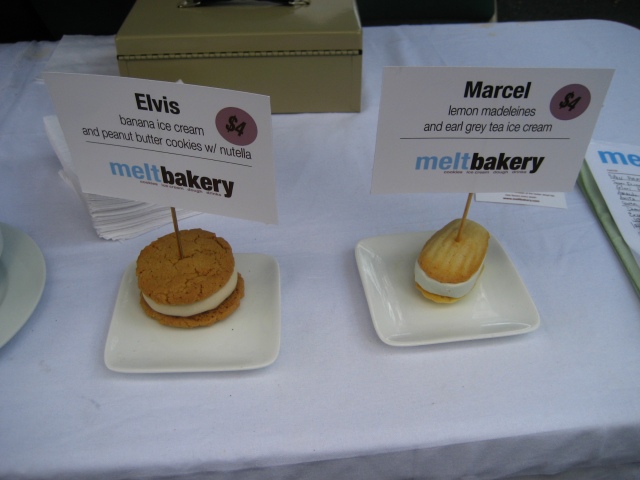 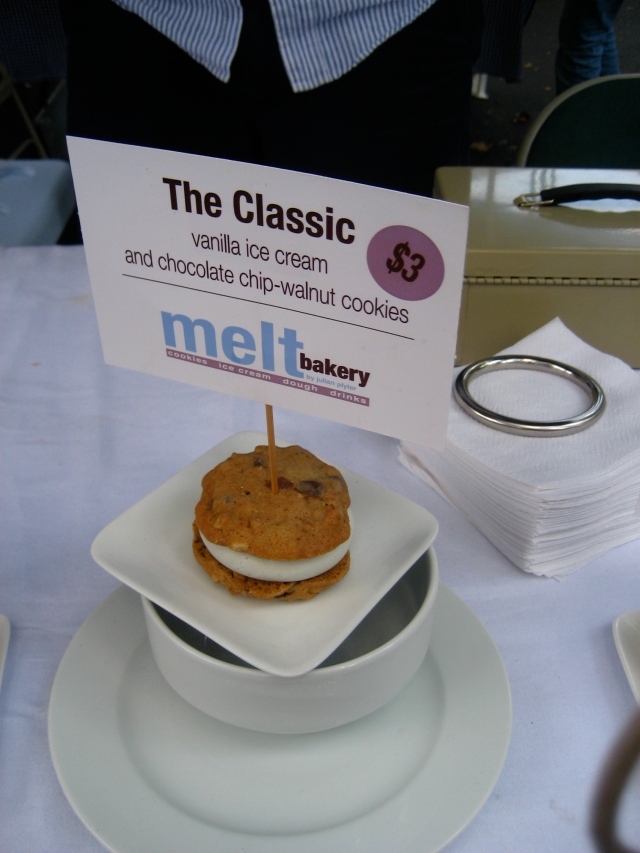 I opted for the classic. I absolutely love simple vanilla ice cream between chocolate chip cookies. The cookie was rich and chewy with large chunks of chocolate and walnuts. I often prefer a higher ice cream to cookie ratio, especially when the cookies themselves are very rich and flavorful. I like to have enough ice cream to stand up to the flavor and character of the cookie. To satisfy my preferred ratio, partway through I peeled apart the sandwich and ate the ice cream with just one of the cookies. And a bonus of this decision, after I was done with my open-faced sandwich, I had the rest of a delicious chocolate chip cookie. 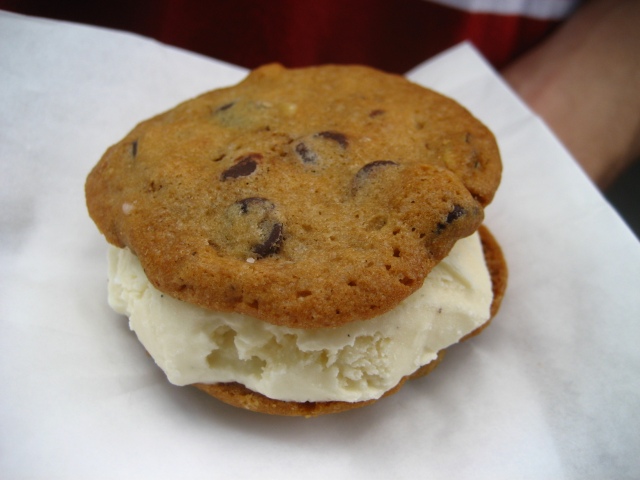 Our next stop was Macaron Parlour, where we met Simon, one half of the team behind the operation and one of the friendliest sellers we met that day. He spoke to us a little about the business. They put a spin on the traditional French pastry, using brown sugar in some of the varieties, and offer flavors not often seen in macarons, such as candied bacon with maple cream cheese frosting, peanut butter cup, and s’mores. Right now you can only buy them at the fair or on Etsy. I also found out that Macaron Parlour at one point shared kitchen space with Kim from the Treats Truck. 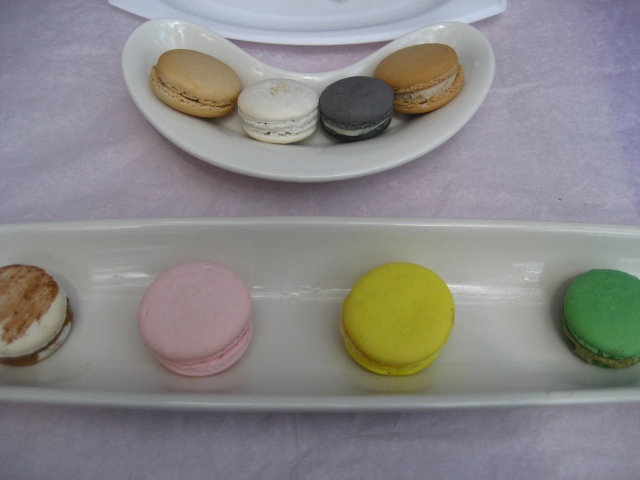 The coffee macaron we tried was excellent. The cookies were nicely chewy and the filling, which held the majority of the coffee flavor, was very smooth, light, and buttery. On my next visit I plan to try the Caramel Fleur de Sel and Cinnamon Pistachio. 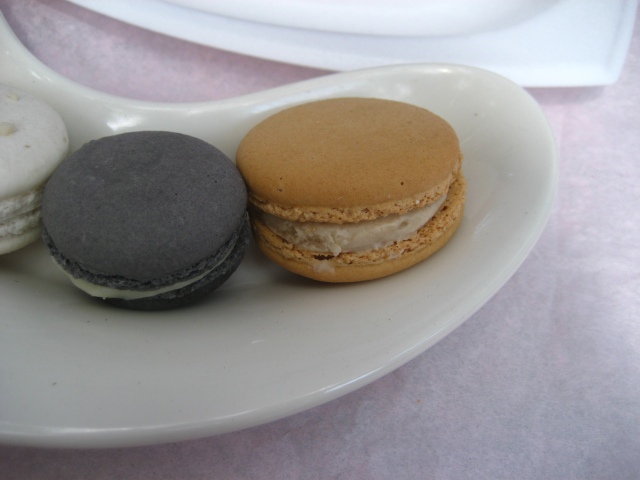 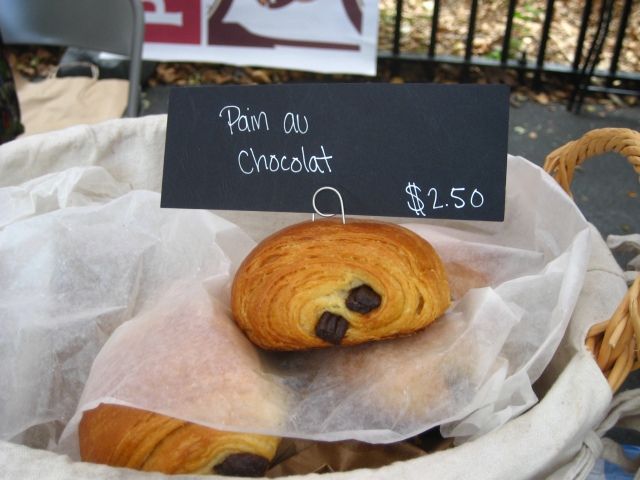 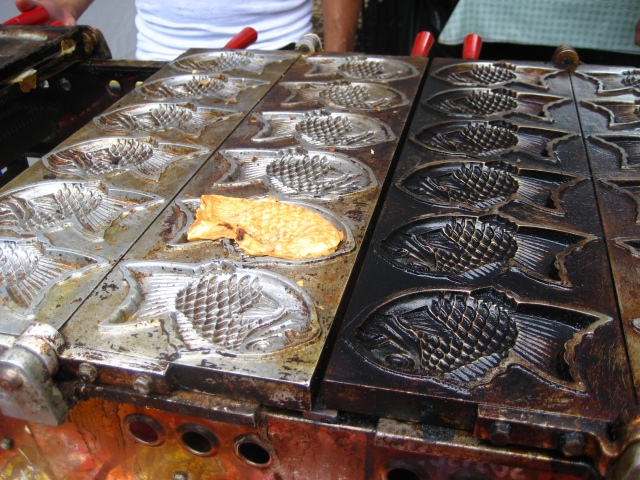 For some savory thrown into the mix, Dave opted for a Taiyake, a Japanes waffle with sweet red bean paste from Japan Gourmet. They cook the waffles right before your eyes in fish-shaped molds. Every order comes hot and fresh off of the griddle. It was delicious right off of the griddle, with warm sweet red bean paste surrounded by waffle that was fluffy on the inside nicely crisped outside. And they’re an inexpensive treat at only $3. 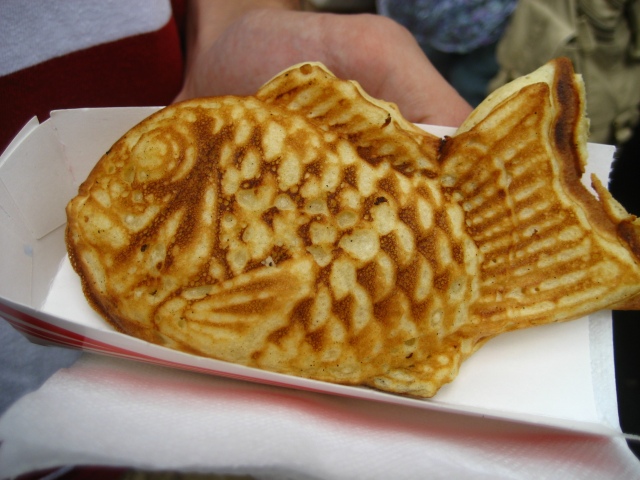 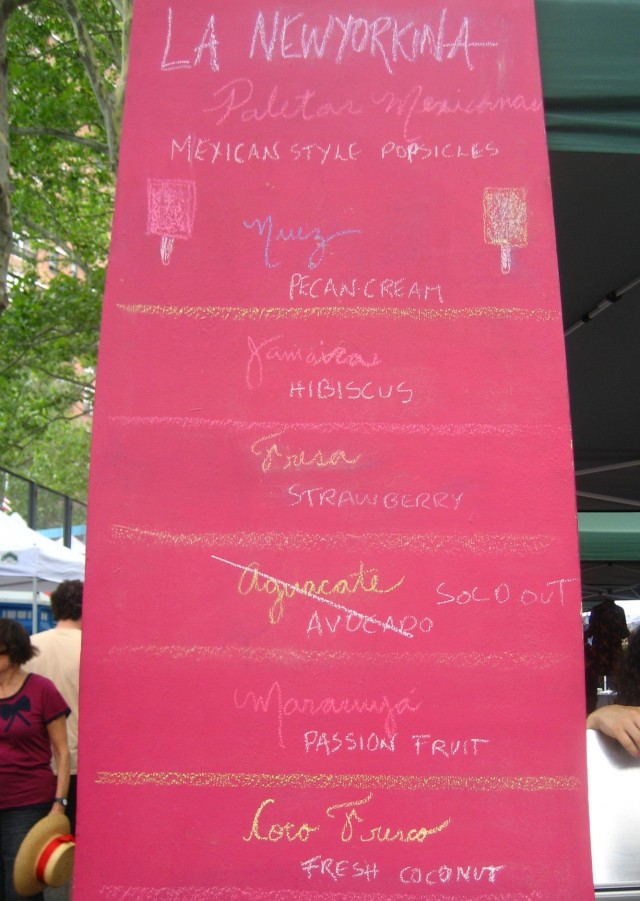 Paletas and popsicles are all the rage this summer. La Newyorkina offers traditional fruit varieties like watermelon and strawberry as well as some more unusual flavors including avocado, hibiscus, and pecan cream. 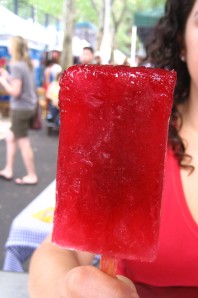 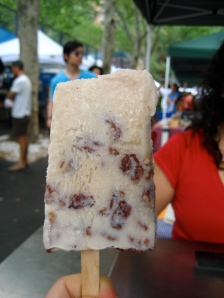 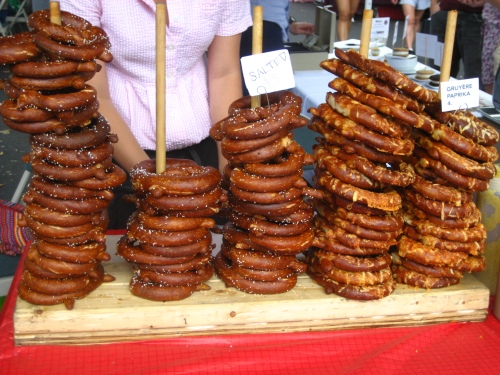 Sigmund Pretzel Shop had their authentically German soft pretzels for sale. On this particular day, they had the original salted variety as well as a gruyere-paprika. A larger selection of flavors, including caramel-pecan and cinnamon raisin is available at their store on Avenue B between 2nd and 3rd Streets. I tried one of the Wankos, a peanut butter chocolate chip cookie with hard pretzel chunks. It was very thick and chunky and nailed the sweet/salty balance perfectly. 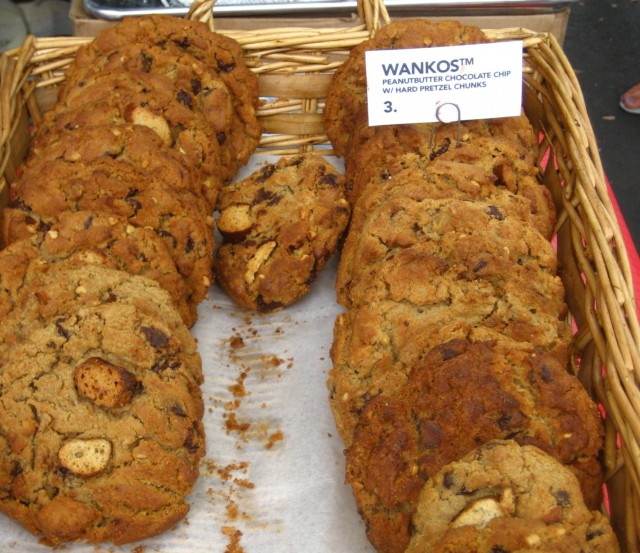 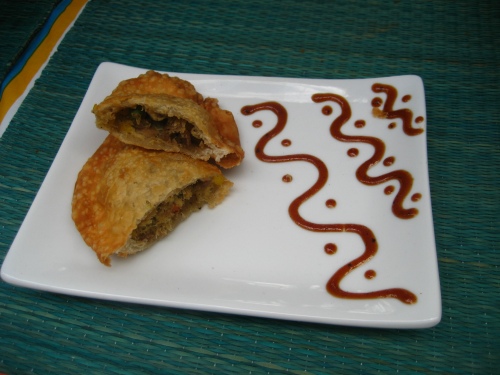 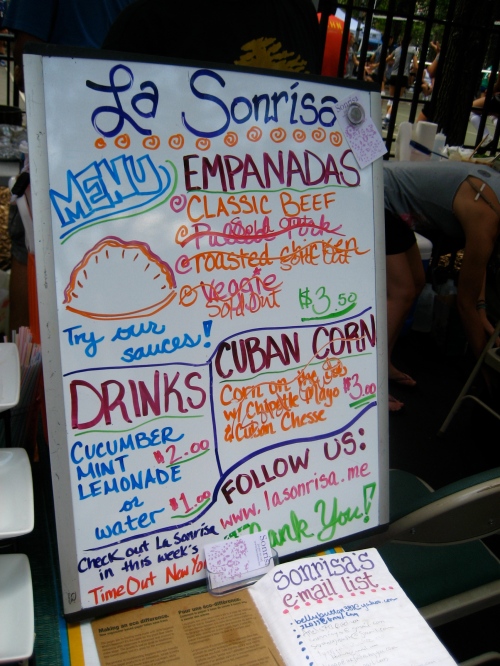 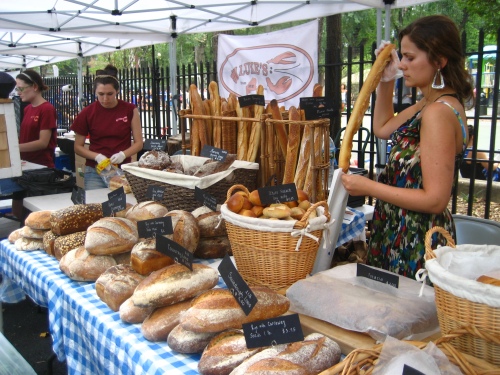 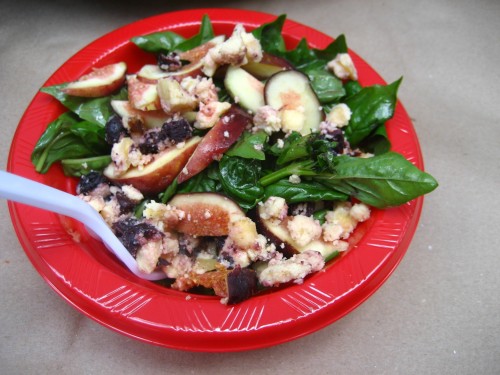 Basil fig salad from Light & Savory. Linda Kubit of Light & Savory makes a different creation each week made from ingredients from the Hester Greenmarket. Light & Savory does catering as well. Check out their full menu offerings here. 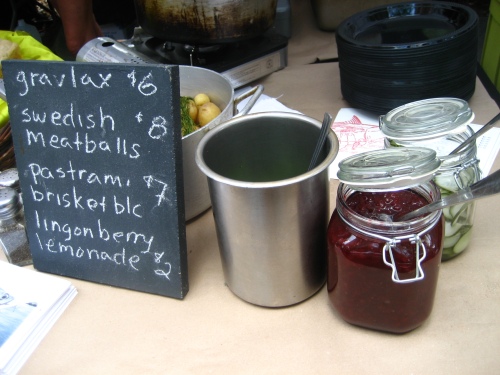 With the intense variety of food offerings, representing the diverse mix of cuisines and nationalities present on the Lower East Side, there is a lunch and dessert offering to satisfy most anyone. The majority of the stalls are situated around the perimeter, with the center containing a few more stalls as well as picnic tables where you can enjoy your meal or snack. In addition to food, the fair hosts several craft vendors who sell clothing, accessories, and more. 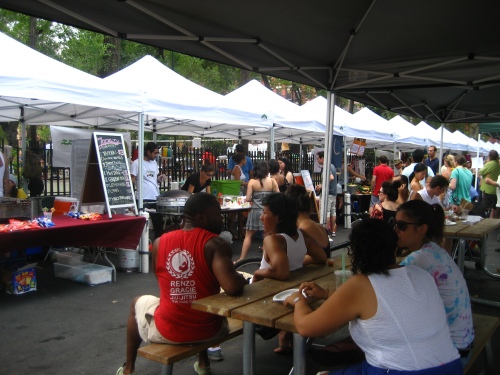 And on some days, you might be most thankful for the stall in the back right corner, one for which no fee is required. Equipped with nozzles that spray an atomized stream of water, the misting tent provides a much-appreciated cool refuge in between your dining and perusing. 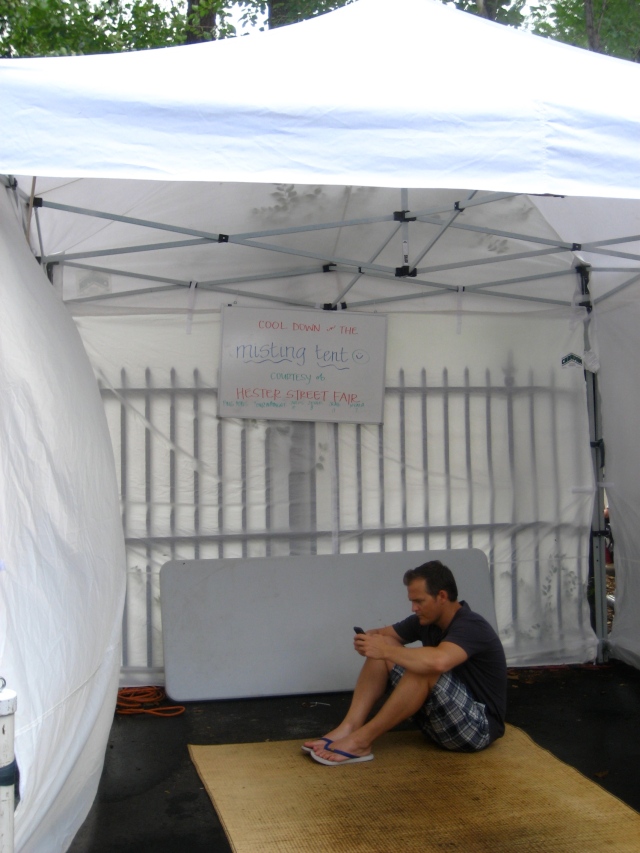