Clover, The Egg and Eggplant Sandwich

Whenever I come back to a place I have been previously, I find myself torn between getting what I have ordered before and that I know I like, and trying something new. Especially if that something new contains an ingredient that I have never been fond of. The egg and eggplant sandwich at Clover contains deep-fried eggplant, hummus, tahini, cucumber, tomato, and hard-boiled egg. Ever since I was little, I have had a strong aversion to eggs. It has only been in the past few years, beginning with when I lived in Italy, that I have started to come around to eggs-in certain forms. Scrambled I can do if they are not too runny. Sunnyside up-no. Omelette- yes. Hard-boiled-nooo. Clearly it’s something about the yolk and the white being separated that puts me off.

But apparently if they are accompanied by other flavorful ingredients, I don’t mind them. Case in point, the egg and eggplant sandwich. I was skeptical because of the egg but I ended up loving it. I actually liked that the egg made the sandwich somewhat lighter than the chickpea fritter. Since the egg is fairly mild, you primarily taste the tahini, hummus and vegetables. Quite delicious actually. I definitely plan to order it on future trips to Clover. I daresay it might be my new favorite. 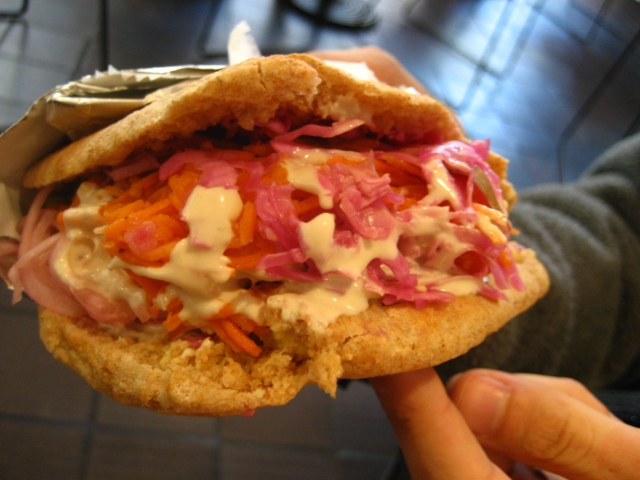 This entry was posted in Boston, Reviews and tagged Boston, food truck, sandwiches. Bookmark the permalink.

3 Responses to Clover, The Egg and Eggplant Sandwich