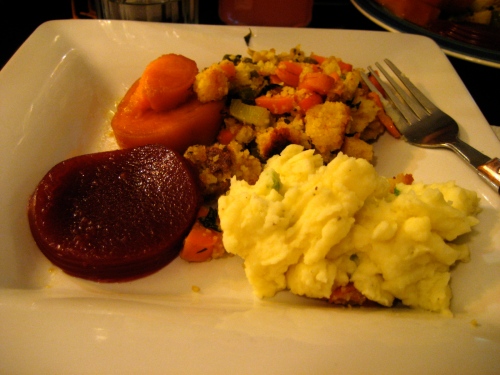 In my sophomore year of college, my friends and I decided to host our own Thanksgiving dinner in our dorm before we all left for break. In our kitchen-less suite, we cooked and assembled all of the usual suspects using a combination of communal kitchens and hot plates in our rooms. We coined it G3 Thanksgiving, G3 standing for Gordon 3, our freshman year hall. 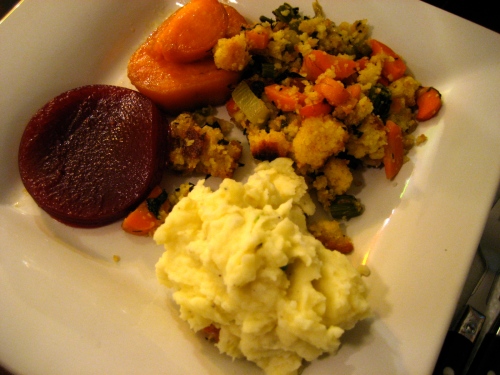 Producing the meal without a kitchen was an impressive feat, but more than that, it was exciting to gather as friends and celebrate Thanksgiving our own way before we all dispersed home to celebrate with our families. We enjoyed it so much that we continued it our junior and senior years. We skipped a year in the middle (had I been in the country, I would not have let this happen), but resumed it last year for the first time out of college. This year, my friend Katherine hosted it at her apartment. 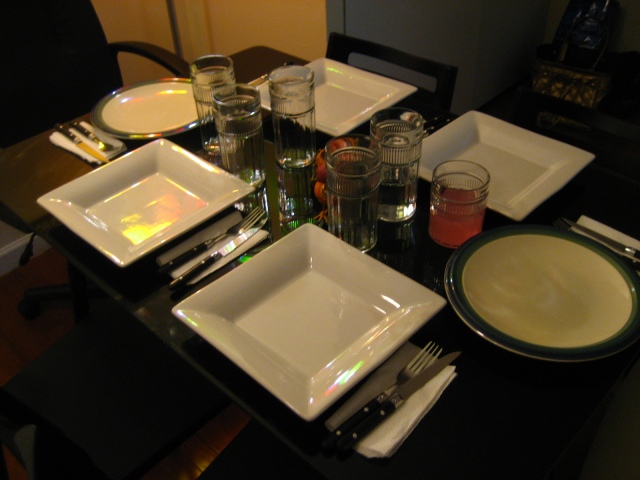 By now, we have each established our own specialties and we assigned dishes accordingly. Katherine makes a traditional green bean casserole as well as buttery-sweet candied sweet potatoes. Nate makes fluffy, rich mashed potatoes. Last year, he made them with lots of garlic. This year, he mixed in scallions instead, along with heavy cream and sour cream for a very rich taste and smooth texture. 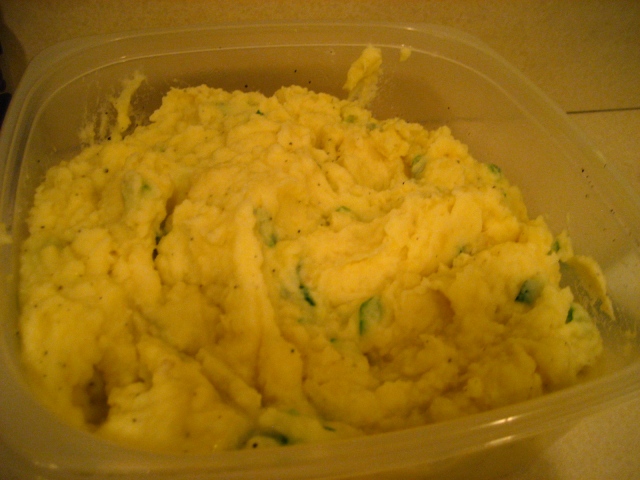 For the second year in a row, I made cornbread stuffing. I’ve pasted a recipe at the bottom, although, like many of my dishes, I make them up as I go along. But the recipe provides the basic framework. 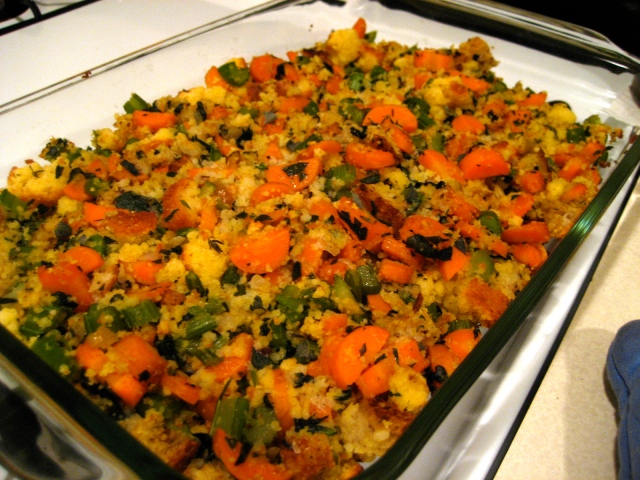 Mat has claimed the role of master turkey roaster and carver. Since it was a smaller group of us this year, he opted for a turkey breast as opposed to a whole bird. 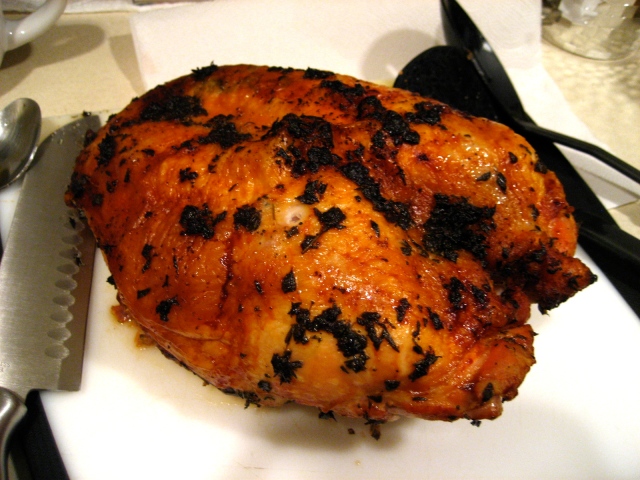 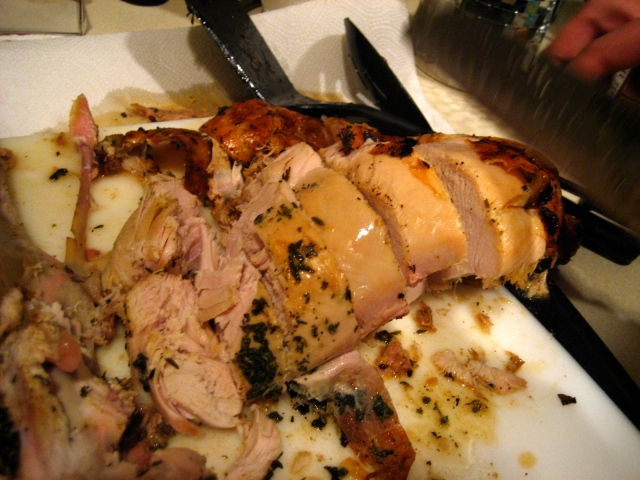 After waiting an eternity for the meat to reach a high enough temperature, he let the turkey rest on the counter just long enough and then did a beautiful carving job. 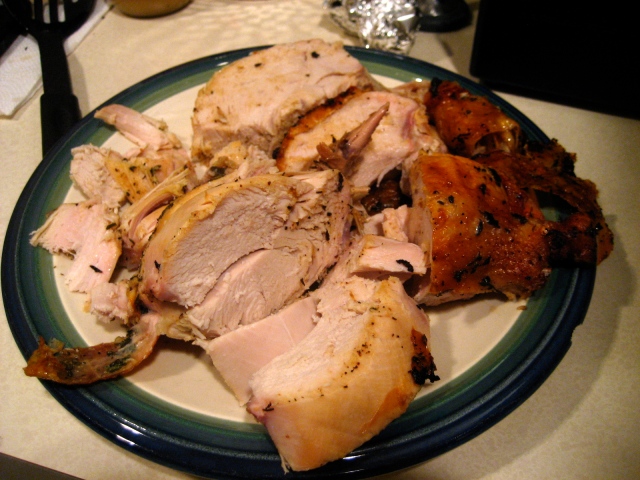 We finally sat down to eat, conveniently right in between the Pats game and the Giants game. Clockwise from top: Whole Foods brand organic jellied cranberry sauce (I prefer homemade whole berry sauce, but this one was quite good as far as canned versions go), mashed potatoes, cornbread stuffing, candied sweet potatoes, green bean casserole, turkey with gravy. 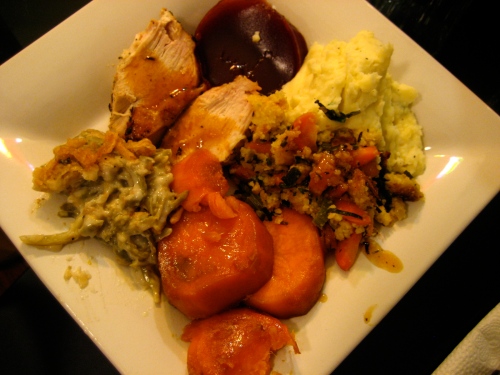 Everything was delicious and we fought the urge to keep consuming until everything was gone. After dinner, we took a short breather and then dug into desserts. 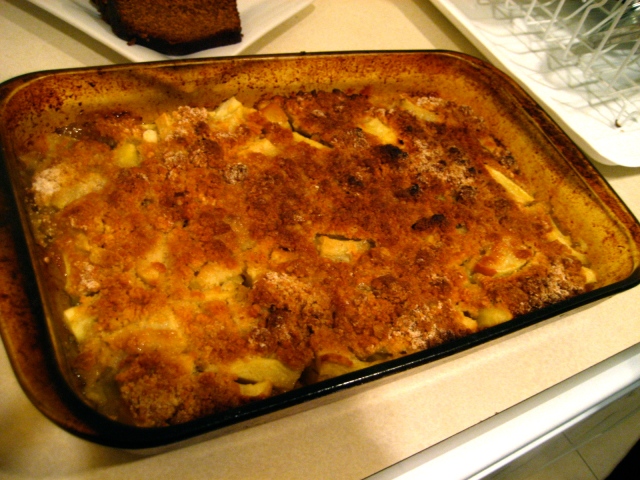 Apple crisp and mixed berry pie courtesy of Kate as well as pumpkin bread from my house and a chocolate pudding pie made by Katherine that I did not get a picture of. 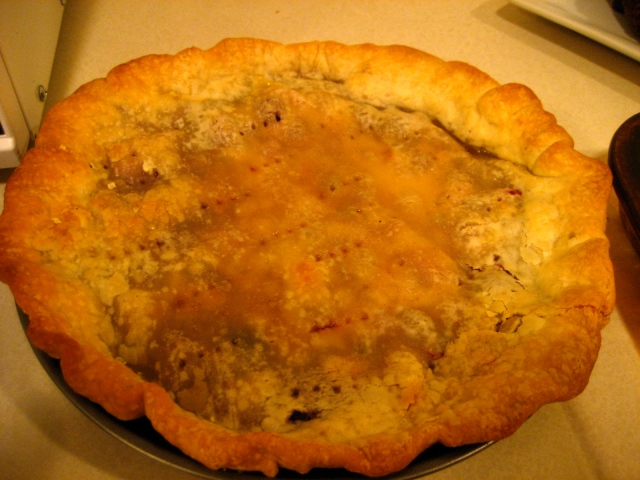 G3 Thanksgiving is one of the highlights of my holiday season. I used to live next door to these people and see them every day, and now I see them just a few times a year. With each of us busy in school or work, it isn’t often that a large group of us gets together at once. And so for this opportunity for us to gather, catch up, and enjoy one another’s company, I am deeply thankful. 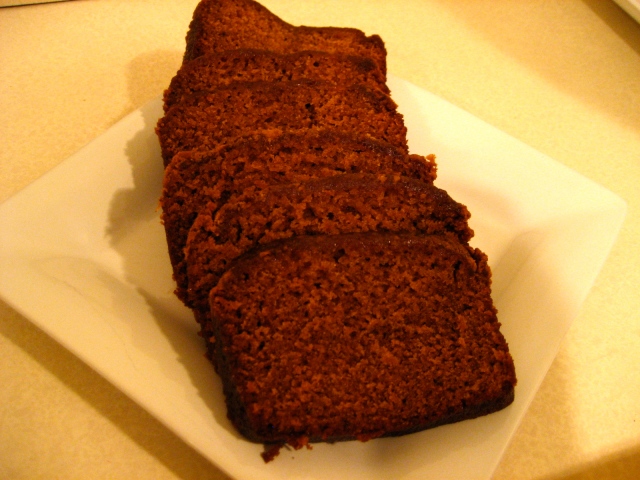 1. Heat the oil and 2 tbsp butter in a large pan on the stove. Add chopped onion. Sautee on low heat until caramelized.

2. Add carrot and celery. Continue cooking on low heat until vegetables are softened. A few minutes before the vegetables are done to your liking, add a couple of springs each of rosemary, sage, and thyme. Stir in salt.

4. Place cornbread in a large bowl. Pour vegetables and liquid on top and toss to combine until bread is moistened. At this point, you can add more of any moistening agent, either water or butter, depending on how much liquid the cornbread absorbed. Or for extra richness, you can add heavy cream.

5. Pour mixture into either a 9×9 square pan. You can also use a 9×13 pan, which is what we had last night. The stuffing will just be spread out more thinly. Dot the remaining 2 tbsp of butter across the top of the stuffing. Bake at 350 for about 15 minutes, just until the top starts to brown. Enjoy.

Notes: I add water to the vegetable mixture because it then turns into my own homemade broth. Feel free to add pre-made vegetable broth, or heavy cream instead for a richer moistening agent. Before putting it in the oven, dot as much butter on top as you like. I was being conservative when I said 2 tbsp. I probably add more.

This entry was posted in New York. Bookmark the permalink.