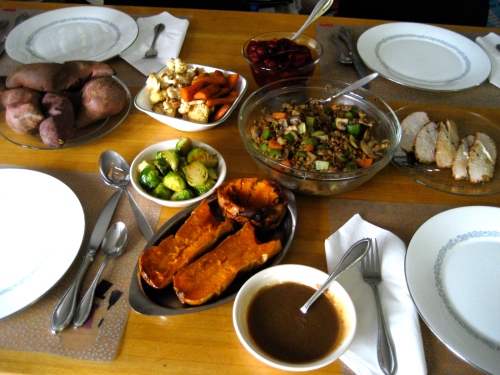 This Thanksgiving spread was supplied almost entirely by the Union Square Greenmarket. With my passion for farms and sustainable agriculture, there’s a sense of pride and accomplishment that comes from creating a meal largely out of produce that came directly from the farm. A few of the dishes were actually inspired by things I saw or tasted while at the market earlier in the week. 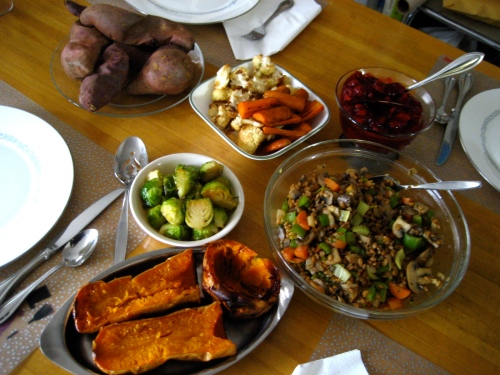 One thing that did not come from the farmers’ market was the turkey. Turkey, of course, is widely available at the Greenmarket, but not in very small amounts. Our Thanksgiving dinner was for four people: one does not eat meat, and two eat very little meat. We have no need for more than a few slices of breast. People inevitably ask me how I do Thanksgiving without turkey, to which I can now reply, just take a look at this spread. Thanksgiving is the closest our culture comes to having a holiday that celebrates the harvest. So naturally, what better occasion to take advantage of all that the region has to offer at this time of year. 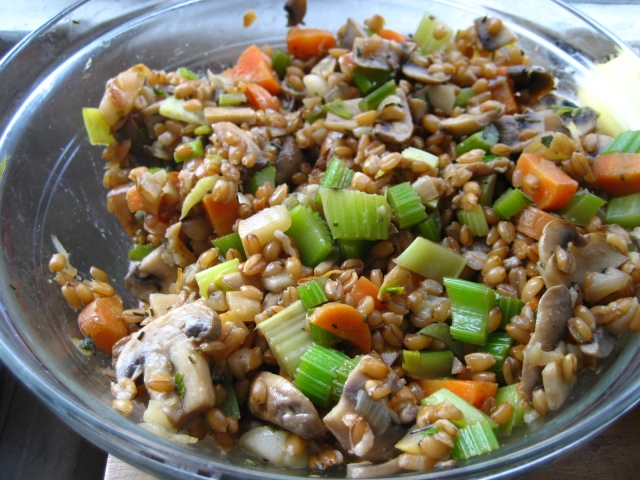 I was inspired to make this Farro and Mushroom Stuffing when I tasted a farro and mushroom soup that was being demoed at the Greenmarket last Saturday. As much as I love cornbread stuffing, I am also a big fan of hearty grain stuffings. I’ve used wild rice as the grain in stuffings in the past. Farro struck me as something fun and new. It goes beautifully with herbs and vegetables. We actually grew spelt at Spannocchia and would serve it with pesto and sliced cherry tomatoes. Cayuga Pure Organics sells farro (also known as emmer) at the Greenmarket, as well as oat groats, beans, and flour. I tossed the cooked farro with a mirepoix as well as mushrooms, because they go nicely with a chewy grain, herbs, and diced pear for some sweetness. 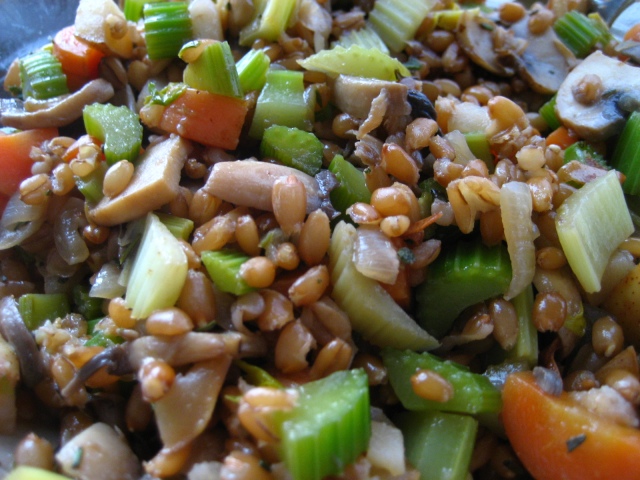 On Monday, a chef demoed another dish at the Greenmarket: butter and maple-glazed brussels sprouts. I added this to my list of things to make for Thursday. The recipe is very simple and the resulting dish is buttery in both taste and texture. We decided to steam the sprouts for a minute to soften them before adding them to the pan. Next time around, I won’t do this as they end up having ample time to soften in the pan and will caramelize more without steaming first. 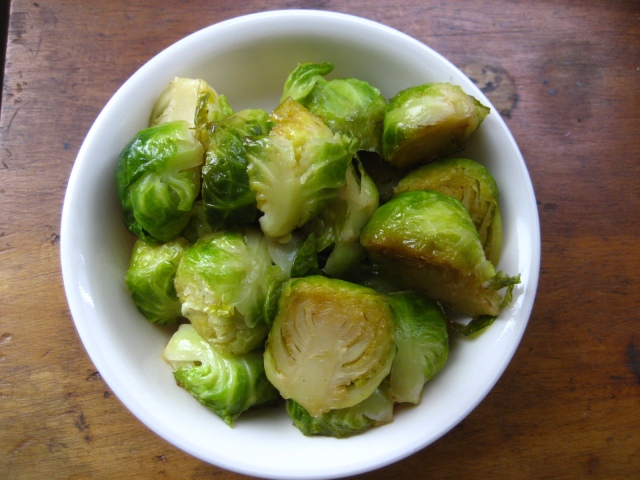 There are several varieties of squash that I like, but butternut always seems to be the one we choose for Thanksgiving. In past years, I’ve made it into the requisite butternut squash soup, but this year, we decided to serve it simply roasted. An excellent decision as this squash was extremely sweet and flavorful on its own. 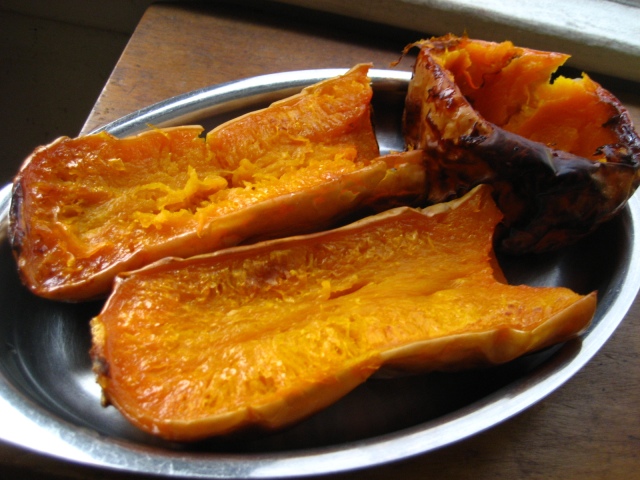 My mom makes the cranberry sauce every year. She often adds orange zest and flesh. We did not have any oranges around so she decided to add chopped apple to the simmering cranberries. It was smooth with soft pieces of cranberry and apple throughout. The apple counters the tartness of the cranberries and you end up needing less added sweetener. 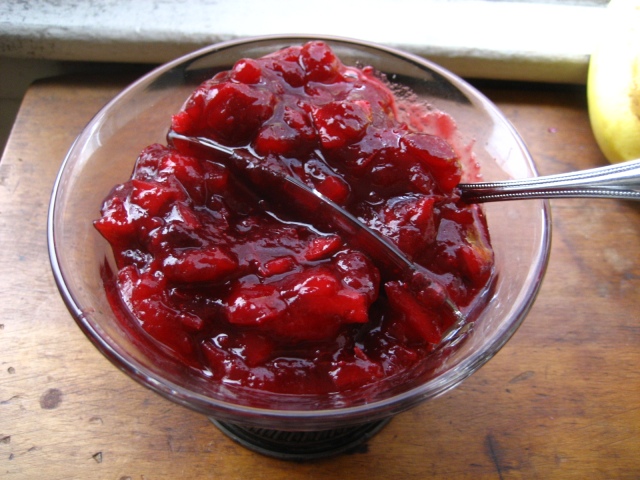 Simple roasted cauliflower is one of the most delightful cold weather dishes. It turns incredibly sweet in the oven and the edges become brown and just slightly crispy. We roasted a few carrots as well, because those are just excellent: chewy, sweet, and tender. 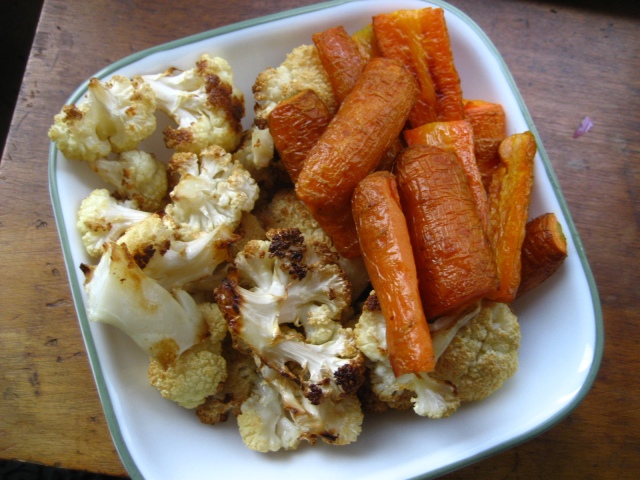 And if you ever need to answer the question, what does a non-meat eater eat on Thanksgiving, feel free to make use of this post. To be continued…(with dessert)

1. Boil farro for 45 minutes or until soft and chewy.
2.  Heat 2 Tbs olive oil in a pan. Add onion and cook 5 minutes, until translucent and slightly caramelized. Add mushrooms. After 3 minutes, add carrots, celery, pear and herbs. Cook 3-4 minutes or until they start to soften.
3. Add cooked farro to the vegetable mixture. Toss with salt and cider vinegar. Transfer to a serving bowl and garnish with fresh rosemary and sage.

1. Melt 2 Tbs butter in a pan. Add sprouts and cook for 2 minutes, until they begin to brown.
2. Add maple syrup and mustard, reduce heat to low and let sprouts and sauce simmer for 10 minutes, until sprouts have softened. Remove the sprouts from the pan and reserve.
3. Add cider vinegar and salt.  Cook the sauce for 1-2 minutes more, until the sauce thickens, and then pour over brussels sprouts. Serve warm.

This entry was posted in Events, Recipes and tagged holidays, Recipes. Bookmark the permalink.

5 Responses to Thanksgiving 2010 (the savory)