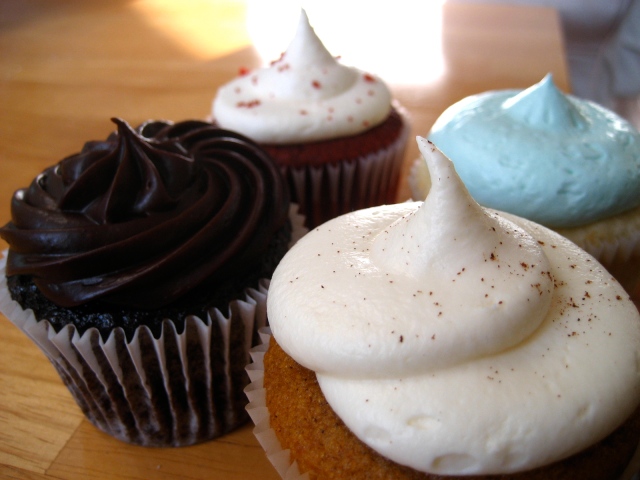 No, not me. But a trio named Everett, Christina, and Megan do. Back in September when I tabled  at the New England Dessert Showcase, I met dozens of enthusiastic cupcake bakers and eaters who were excited for the next CupcakeCamp. Two that I met that day told me about their fledgling cupcake business, named We Make Cupcakes and that they were eager to show their cupcakes at CupcakeCamp Boston 2011.

I had the opportunity to sample the tasty creations of We Make Cupcakes this weekend and they are quite delicious. I cannot wait for you all to try them at CupcakeCamp. Though if you would prefer to not wait until then, I highly recommend placing an order with them sooner. 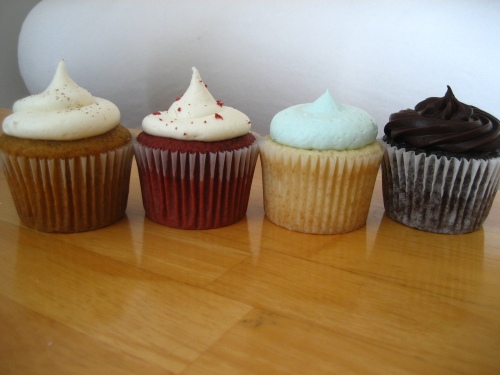 I met up with Everett and Christina on Saturday morning to chat and pick up the cupcakes. I had made no flavor requests but was hoping for either pumpkin, carrot or red velvet, with lots of cream cheese frosting. They must have read my mind because they showed up with a box containing both pumpkin and red velvet in addition to chocolate with chocolate ganache and vanilla with vanilla frosting.

I dug into the pumpkin first. This one ended up being my absolute favorite. The cake on its own is incredibly moist, airy and intensely pumpkin-flavored. I could taste actual pumpkin as opposed to just spices. The cake completely held its own and I would be more than content to eat the cake as is. Not that I would turn down cream cheese frosting. The frosting was smooth, fluffy, and nicely sweet. This cupcake was delicious on all accounts.

Next up I tried the red velvet. The cake texture was very different than the pumpkin, which I expected since they are two very distinct flavors. The red velvet was more dense and less moist than the pumpkin. To me, this sort of texture is appropriate for the tangier buttermilk flavor of the red velvet cake. I almost liked the cream cheese frosting better when paired with the less sweet red velvet because the flavor contrast was more apparent. Verdict? Also very good.

The chocolate cupcake was topped with a rich, fudgey ganache that could be its own dessert. I am not always fond of ganache as a cupcake topping. If the cake is very dense, the ganache can be overkill. Thankfully, We Make Cupcakes makes an excellent chocolate cake. It is very moist and fluffy with a pleasant chocolate flavor. The ganache was a smooth, rich counterpart.

The vanilla cupcake was not your typical vanilla cupcake. The cake had a very subtle sweetness and a hearty texture that somewhat reminded me of a corn muffin. The smoothness of the Swiss buttercream frosting was a nice accompaniment to the substantial cake.

We Make Cupcakes makes several other flavors that I am excited to try, namely the Lemon, the Snickerdoodle, and definitely the Roasted Banana with Honey Cinnamon Frosting. Many thanks to Everett, Christina and Megan for allowing me to sample their creations. It was truly a treat. We Make Cupcakes can fill cupcake orders for any occasion. To see the full list of flavors and to inquire about ordering, check out their website.

This entry was posted in Boston, Reviews and tagged baking, Boston, Cupcakes, dessert. Bookmark the permalink.

11 Responses to We Make Cupcakes