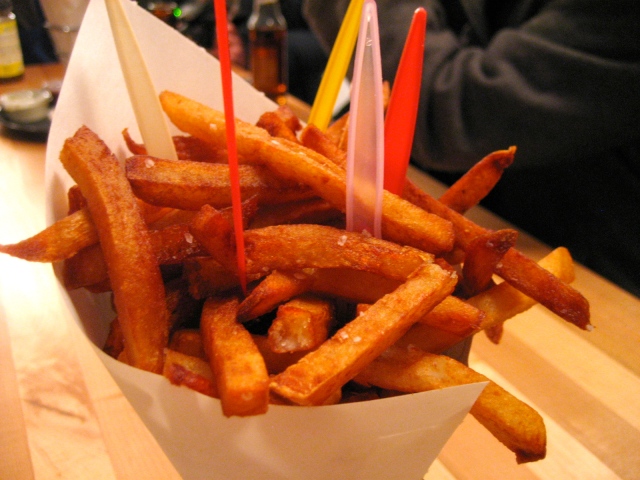 It is always exciting when a new restaurant opens. It adds to the fun though when it is a new concept, one not previously seen in the area. Saus opened last week just blocks from Faneiul Hall, serving three things–Belgian frites, poutine, and Belgian waffles. I had the opportunity to try out Saus last week along with some fellow bloggers.

We were presented with multiple cones of fries with a cup of every single dipping sauce that they offer. The fries were good, I would not have objected to a little more crispness. But the wide array of house-made dipping sauces were really what made the experience. Every single one of the sauces is made in-house and they range from bacon parmesan and cheddar & duvel ale to presto pesto and an intense garlicky dip aptly named vampire slayer. 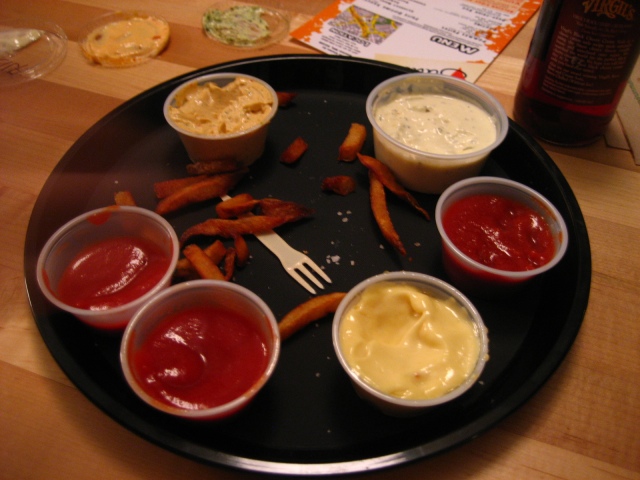 My personal favorites were the plain house-made ketchup, the truffle ketchup and the caramelized onion mayo. The large and medium cones of fries each come with one sauce free. After that they are 75 cents each. Just in terms of quantity, one of those little cups would not be sufficient for the amount of dip I like. Chin, one of the owners who spoke to us about the evolution and planning of the restaurant, said that one possibility they are considering is doing a flight of several sauces, which I think is a great idea.

If I were coming here on any old evening, I don’t know that I would get both french fries and waffles, tempting as it may be. I will though, come to Saus especially for the waffles. They are the traditional Liege style Belgian waffle with pearl sugar mixed into the batter that melts and caramelizes as the waffle cooks.

There are four toppings, all house-made: berry berry, salted caramel, lemon cream and homemade nutella, that last of which was sadly not available on the night we went. Though I am obsessed with everything salted caramel, I found that I enjoyed the berry berry sauce most. The waffle is dense and chewy and I found that the lighter consistency of the sauce complemented the richness of the waffle best. I will be back very soon, if only to try the nutella on a waffle.

Many thanks to the folks at Saus for hosting us for the evening.

This entry was posted in Boston, Reviews and tagged Boston, fries, Reviews, waffles. Bookmark the permalink.