Earlier this month, I attended a pear-themed dinner at Rialto hosted by the Pear Bureau Northwest/USA Pears. We enjoyed a four-course dinner prepared by Rialto’s executive chef Jody Adams. Each course incorporated some variety of pear. Pears have actually been one of my favorite fruits since childhood so I was quite excited for this event. Before the meal, we received a pear tutorial from some representatives of the Pear Bureau. The most interesting part of the evening for me was learning about some lesser known varieties of pears, in particular, the Star Crimson pear, which is to the right of the glass in the photo above. It has a striking red hue, and a similar soft and juicy flesh as a Bartlett, but incredibly sweet. I would love to find out if they are grown anywhere in the northeast.

The first course was an Autumn Concorde Pear salad with crinkle cress, fennel, Baylee Hazen Blue cheese, walnuts, and Moscato dressing. This was a firmer pear, perfect for pairing with a pungent cheese and walnuts. The moscato dressing gave the shredded fennel a slightly softer texture and flavor. 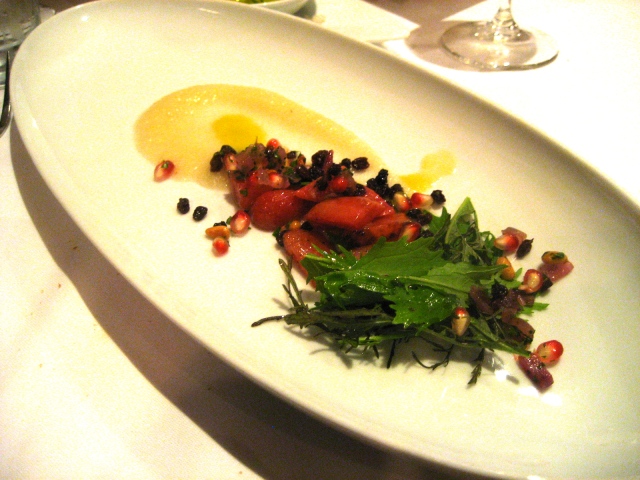 The next course was chioggia beets with pickled Bartlett pear puree, currant, pomegranate and mizuna. The chioggia beets were a substitute for crispy mackerel escabeche in the standard dish. The pear puree struck a mellow balance between sweet and tangy. It formed a velvety sauce for the beets and hearty greens.

The main course feature roasted delicata squash with brussels sprouts, roasted Forelle pear and mustard seeds. The squash was the substitute for roast chicken. The squash rings were roasted to perfection with a dense, creamy consistency and caramelized exterior. The crunchy sprouts were a lovely contrast to the starchy squash rings, but the Forelle pears were the star of the plate. They maintained a firm texture despite being roasted and added a fruity sweetness to the dish.

I loved the route that Rialto decided to take with dessert, pairing pears with chocolate for the Vin Santo chocolate tart with ginger spiced Seckels. A chocolate tart crust encased a rich and incredibly smooth chocolate filling. The pears were exquisite, with a delightful candied texture. Slightly firm but tender with a prominent ginger flavor that complimented the richness of the chocolate. I first encountered pear and chocolate desserts in Italy, so it was a delight to see that pairing again here, and with such flawless execution.

Many thanks to USA Pears for the introduction to several new-to-me varieties of pears and to Rialto for the inspired meal.

14 Responses to Rialto and USA Pears