On Sunday morning of my trip to DC, Sarah, Rachel and I headed to the Dupont Circle Farmers’ Market. They both told me it was big but I was not expecting THIS big. I’d say it’s on par with the Union Square Greenmarket in terms of size. And the variety! Gelato, pasta, every kind of cheese imaginable, every fruit and vegetable, salsas, jams, prepared foods, bread, pastries, meat, mushrooms, plants and more. This website provides a neatly organized and comprehensive list and map of all the market vendors.

Next Step Produce from Southern Maryland had a wealth of those elusive Jerusalem artichokes.

That same farm also had persimmons, something I had only ever seen at farms and farmers’ market in Italy. I knew they grew in California, I was not aware they grew along the mid-Atlantic.

We sampled several goat cheeses from Firefly Farm in Maryland. Rachel chose a log of the Bûche Noire which was soft and crumbly on the outside and gooey in the center. 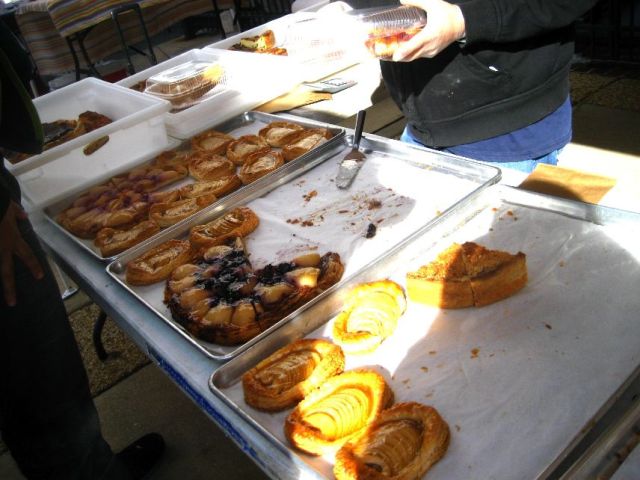 Bonaparte Breads from Baltimore had a handsome display of European pastries: glazed fruit tarts, buttery croissants, pain au chocolat and more. Rachel and I split a sizable almond croissant, which was pleasant but not fully flakey and paled in comparison to the gold standard of almond croissants at Patisserie au Kouign-Amann in Montreal.

Keswick Creamery hands down won the award for best samples. The Newburg, PA farm had practically every one of its cheeses out to taste, including ricotta, quark, feta, several hard cheeses, as well as yogurt and chocolate pudding.

The Dupont Circle Farmers’ Market runs year round, with shortened hours and slightly fewer vendors from January through March.