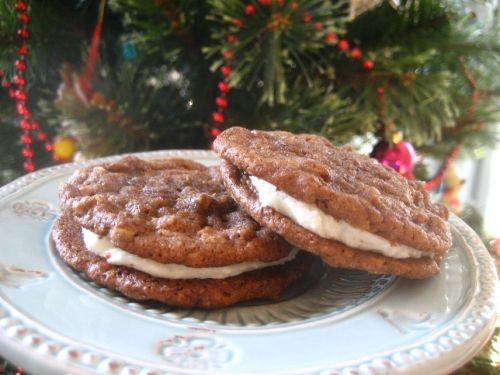 These were originally just going to be Nutella Oatmeal cookies. Shannon had some bloggers over to her place for a cookie swap this past weekend and I debated for days what to make. After taking inventory of my ingredients, I decided to combine Nutella and oatmeal into a cookie. I made the dough ahead of time from this recipe and baked it into cookies early on the day of the swap. I followed the recipe exactly except that I added a bit more Nutella than called for. I wanted there to be no mistaking what was in these cookies. I took the first batch out of the oven when they still looked quite soft in the middle, but after they cooled they were much crispier than I was hoping for.

How do you salvage a too-crispy cookie? Throw some frosting into the mix and make it a sandwich cookie! I have fond memories of eating Little Debbie oatmeal cream pies and I’d been meaning for some time to make a homemade version. I still wanted the cookie to be softer on its own, even without the cream filling, so I took the subsequent batches out of the oven when they looked almost raw in the middle to keep them from being too crisp. These set up nicely when cooled but stayed soft and chewy all the way through. If I hadn’t been trying to remedy the texture of the first batch, I don’t think it ever would have occurred to me to add Nutella to a regular oatmeal cream pie recipe. Sometimes minor mishaps produce the best creations.

2. Cream butter, sugar, and brown sugar with an electric mixer until fluffy, about 3 minutes. Add egg, vanilla, and Nutella and beat 1 minute until well incorporated. Add the flour, oats, baking soda, and salt and mix until combined.

3. Scoop dough into tablespoon-sized balls and arrange on cookies sheets leaving ample space in between. Bake for 5-6 minutes. They should look almost raw in the centers when you take them out.

4. To make the frosting, beat the butter with an electric mixer until light and fluffy. Turn mix to low and slowly add sugar, beating until combined. Mix in the vanilla extract.

5. When cookies are completely cooled, spoon a tablespoon of filling (or however much you like) onto one and press it into a sandwich using a second cookie.