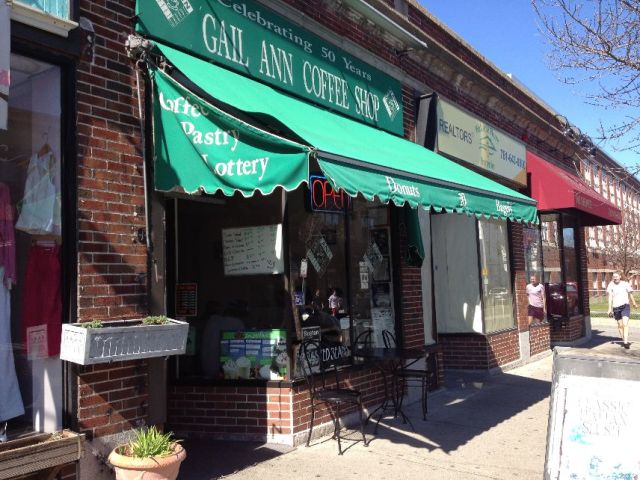 This mini heat wave has been the perfect excuse to continue my ongoing search for ice cream/frozen desserts in the area. Earlier this week, Dan joined me to check out a certain frozen custard spot in Arlington (to be reported on later). I got sidetracked on the way there though when I spotted the word “donuts” on the awning of an old-fashioned coffee shop. I pretty much have donut radar.

I was intrigued because I have done my fair share of donut research and even if I haven’t been to all of them, I thought I was at least familiar with the majority of the donut shops in the area. This name had never come up in my research (though the name is curiously similar to different well-known donut shop in East Boston, Betty Ann Food Shop).

The interior is just as old-school as the exterior. The many donut varieties are laid out in glass case alongside other equally sugary breakfast pastries. Most of the yeasted varieties did not appeal to me, they looked a little too greasy-sugary. The cake donuts though, those looked lovely. They come in plain, glazed, chocolate glazed, powdered sugar, cruller and more. I selected a glazed cake donut, a sort of control variety that I try to order at every shop.

I’d give it a solid 7 out of 10. The exterior was perfectly golden, with a modest layer of glaze. The inside was fluffy, not greasy. I’d put it somewhere between Donuts with a Difference and Verna’s, not as awesome as DWAD, but better than Verna’s. I stopped at just one since I still had frozen custard on the agenda, but that first one was good enough that I would willingly go back to try a few more.

This entry was posted in Boston, Reviews and tagged donuts, MA. Bookmark the permalink.