Earlier this month, I ended up going out for an impromptu nice dinner. If you ask me for dessert and bakery recommendations in New York, you can expect a novel. When prompted to choose a fine dining spot, though, it took a little bit of thinking. We didn’t want to go far and I quickly thought to look at the menu for Union Square Cafe, Danny Meyer’s flagship American restaurant that opened in 1985. A quick once over of the menu and I was sold. 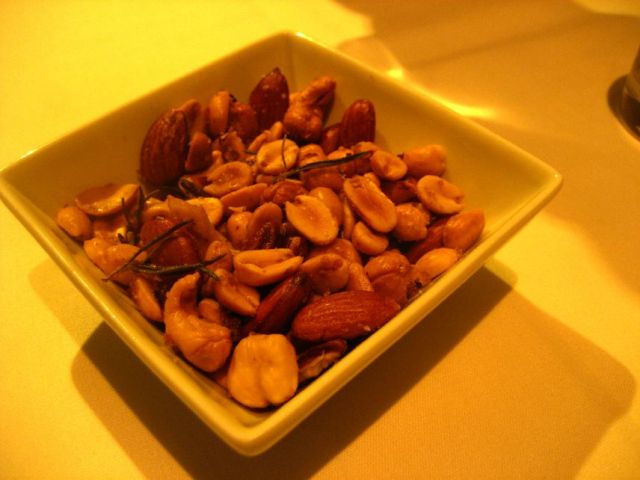 As excited as I was about the menu, I was equally giddy about something else: the bar nuts. I learned about them on an episode of Best Thing I Ever Ate. They are a mix of almonds, peanuts, cashews, hazelnuts and pecans that are roasted with rosemary, brown sugar, butter and a touch of cayenne. We intentionally arrived at the restaurant before our reservation so we could order a drink at the bar and have the accompanying nuts. I’m a sucker for just about any nut creation. These were salty and a little bit sweet. They are not overwhelmingly rosemary-flavored, there’s just a hint unless you bite down on one of the crispy sprigs of herb.

Once seated we received an attractively composed bread basket that included two large crackers, a miniature baguette, a tiny piece of a darker grainy bread, and a slice of a dark boule. To accompany, a cylinder of butter sprinkled with coarse salt, olives marinated in fennel and orange zest, and an outstanding pistachio dukkah. The dukkah featured large chunks of soft pistachio, herbs and salt in a dark and flavorful olive oil. 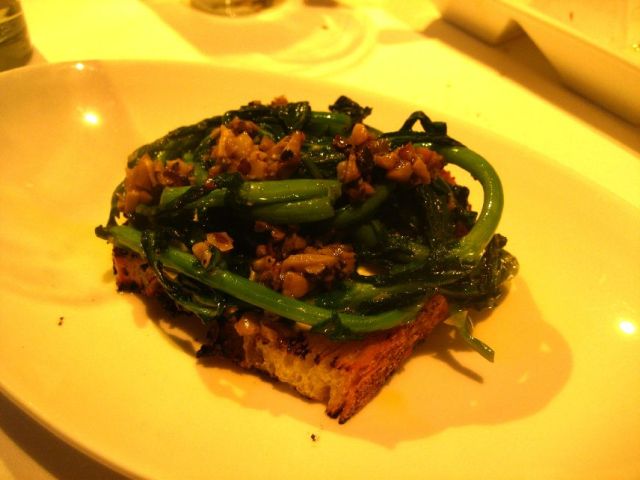 The menu includes a Snacks category in addition to Appetizers. I started with the Spring Rapini & Stracciatella Bruschetta from the Snacks section. The straciatella cheese was partially melted, and soaked into the warm grilled bread. Atop the straciatella was a mince of mushrooms and long, skinny rapini. The one downside, the rapini was a little too tough to bite on top of the bread. While the full pieces made for attractive presentation, a rough chop would have been easier to eat.

The Cara Cara Oranges with pine nuts, ricotta salata, and fennel vinaigrette was a delightful mix of late winter flavors. The salty cheese went nicely with the sweet and slightly tangy oranges. The star of the dish was the fennel vinaigrette that coated the orange slices. The fennel was minced very finely and the flavor was very subtle. The shreds of fresh mint were a bright and refreshing final touch.

I poked fun at Dave for ordering the Chocolate Hazelnut Mousse with chocolate cake and espresso ice cream because compared to the other selections on the dessert menu, it was the most ordinary sounding. As soon as our desserts arrived, I wished I’d ordered this one. The three elements contrasted beautifully against each other: the dark, fluffy cake; the dense, rich mousse, and the cold ice cream. The ice cream was arguably the best part, with a strong espresso flavor. 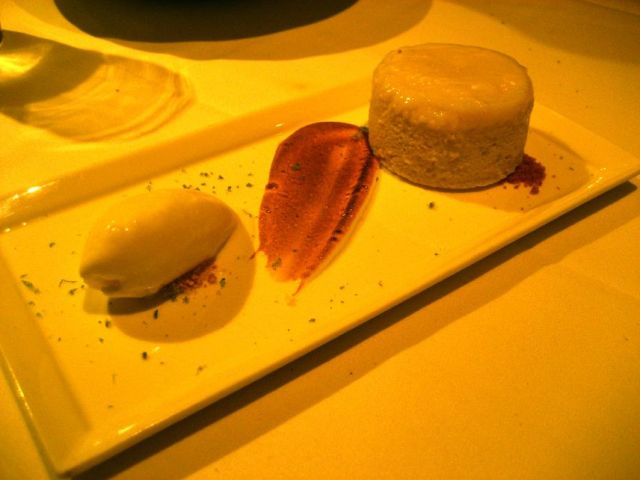 Sadly, my more adventurous Key Lime Steamed Pudding with toasted meringue, graham crumbs, and buttermilk ice cream was the one disappointment of the evening. I knew this was not going to be key lime pie, but even so, as I bit into the pudding, that was all I wanted. The warm temperature of the pudding and the spongey texture just did not feel right with the key lime flavor. I wanted cool and creamy. I also felt that it just was not sweet enough and tasted strongly of lime zest. The buttermilk ice cream, on the other hand, was delightful-light, with a slight tang. 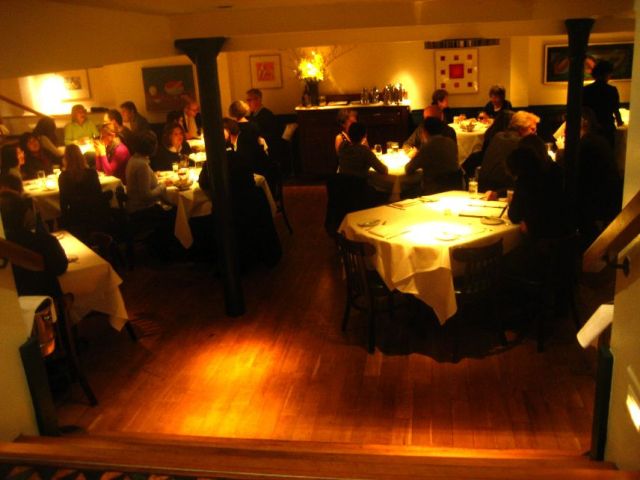 Union Square Cafe is elegant, but completely comfortable. The main dining rooms feels like it belongs in someone’s home. Service was equally warm and friendly. The dishes are creative but not fussy. I was wowed by the thought that went into some of the dishes, resulting in magnificent combinations of flavors and textures (the same reaction I get to many of the dishes at one of my favorite Boston area restaurants, Oleana). After my first visit, it’s easy to see why Union Square Cafe has been a neighborhood mainstay for over 25 years.