If you live in Somerville or any of the surrounding areas, it’s likely you’ve traversed the stretch of Beacon Street that runs between Porter Square and Inman Square, either by foot, bus, or car. The stretch is actually part Somerville and part Cambridge and is dotted with several food establishments.  On the Northern end, close to Porter Square, there is Petsi Pies, Cafe Rustica, RF O’Sullivan’s, Mixtura, Zoe’s Chinese (which didn’t satisfy the one time I tried it) and Pho ‘n Rice. Halfway down is what some refer to as Dali Square, at the intersection of Beacon and Washington Streets. There you’ll find Dali, Bergamot, and The Biscuit, as well as The Wine and Cheese Cask. 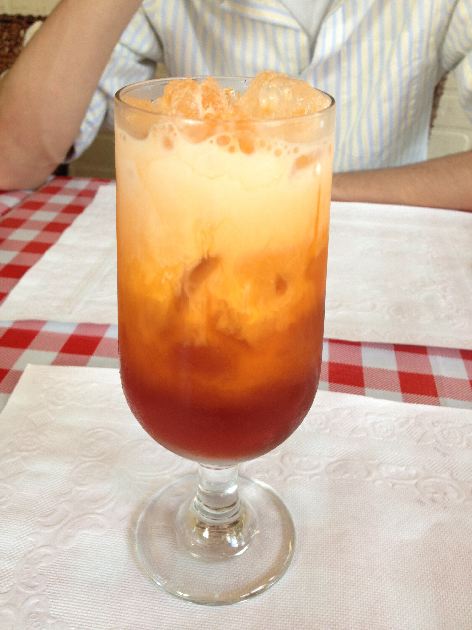 Just beyond that intersection is a small restaurant called Thai Hut that caught my eye every time I passed it. Something about its humble exterior and name, combined with the fact that I’m always game to try a new Thai restaurant.  We started off with our usual appetizer/beverage, a Thai iced tea. It was as good as any other we’ve had. I haven’t noticed much variation in Thai iced teas, with the exception of the over the top rich one we had at S & I Thai.

Pineapple fried rice ($7.55) – fried rice with onion, pineapple, raisins, tomatoes, egg, scallion and curry powder. I enjoy fried rice, and I’m always intrigued by the different variations I see on menus at Thai restaurants. But ultimately, whenever I go out for Thai it’s because I’m craving noodles. Finally, on this visit, I was ok passing on the noodles and trying something else. The rice was fried to a nutty golden brown with a subtle curry flavor. Chunks of pineapple added a juicy sweet and sour note. Lots of flavors and textures that melded together perfectly in one dish.

Crispy chicken pad thai ($8.95) – This was a fairly average pad thai, nothing outstanding. I did enjoy S & I’s pad thai more, but theirs was better than any other I’ve had in Boston.

If I still lived in the area, I would absolutely return regularly just for the pineapple fried rice. It was a really well-executed dish. It was satisfying and a good amount of food for the price. One last item of note, the prices at Thai Hut seem to be about two or three dollars cheaper overall than most other Thai restaurants I’ve been to in Boston, and for comparable quality. While I can’t speak to much else on the menu, I would say the pineapple fried rice is worth venturing over there for.